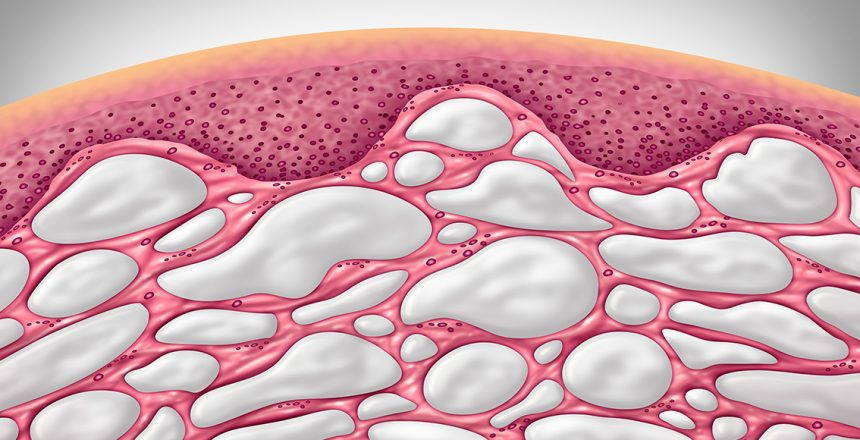 In 2018 the media reported the discovery of a new human organ. In true click bait style this new organ was lauded as the largest and most important of all. The name of this organ? The Interstitium.

Interstitium is a Latin word that literally means to stand between. The term has been used for generations to refer to the contiguous space between two structures. The lace-like networks of connective tissue, fluid and other materials in the interstitium collective comprise the conceptual ‘organ’. The An interstitium is therefore both a space and the content in that space.

The interstitium may appear microscopically small, but it is Tardis-like in nature when it comes to the distribution of water in our bodies. About two thirds of body water is intracellular, approximately 7% is contained within the cardiovascular system, and the remaining 25% is in the interstitium.

The functions of the interstitium include transport of nutrients, solutes, antigens and immune regulators like cytokines, and the dynamic regulation of the complex behaviours of all cells and tissue in the body. Despite its relatively large volume and important functions, the interstitium tends to fly below the radar.

When the work of a person or system is invisible it goes unrecognized or, arguably worse, can be perceived as easy and taken for granted. This is an unfortunate but understandable phenomenon because of absence blindness, an issue I explore elsewhere.

Once we recognize and appreciate the hidden beauty and immense power of the interstitium within us, it soon becomes apparent that there are important interstitium-like spaces in every aspect of our lives and society at large.

Take music as an example. The creation of music depends on silent intervals to distinguish sounds and to vary dynamics, melodies and rhythms. It is the interstitium of silence that allowed Beethoven to compose his prodigious Fifth Symphony and the Beetles to croon: ‘I want to Hold Your Hand’.

In Japanese culture the short but powerful word ‘ma’ is used to describe gaps, (negative) spaces or pauses. Ma refers to actual, literal spaces as well as the perception of spaces – ‘an emptiness full of possibilities, like a promise yet to be fulfilled’ and ‘a door through the crevice of which the moonshine peeps in’.

In martial arts, the space or engagement distance between two opponents is called Maai (interval). Maai also describes the time and effort required to cross the distance and strike an opponent. Success in combat is determined by the ability of a warrior to maintain and control Maai while preventing an opponent from doing so.

The concept of the interstitium is ubiquitous in literature, art and architecture. A line from an old Japanese poem reminds us that: ‘Thirty spokes meet in the hub; though the space between them is the essence of the wheel’. Graphic designer Alan Fletcher writes in The Art of Looking Sideways: ‘Space is substance. Cézanne painted and modelled space. Giacometti sculpted by “taking the fat off space”. Mallarmé conceived poems with absences as well as words. Ralph Richardson asserted that acting lay in pauses…’

Our healthcare system similarly has an interstitium. Secondary care is analogous to the cardiovascular system, while primary care can be conceived as the cells and tissues. Secondary and primary care collectively provide services to the majority of consumers and communities. However, a significant proportion of patients exists in an interminable interstitium within which their health care needs are unrecognized or unmet.

This fact provokes challenging questions: How do we ensure the best possible journey for every patient within the constraints of finite resources? How do we best support each part of the system to improve their efficiency and effectiveness? How do we ensure sustainable excellence in healthcare?

We urgently need a new type of healthcare professional who are willing, ready, and able to inhabit the interstitium. In Queensland, there are a few clinicians already working as prototype Interstitium Practitioners. Two examples are GP Liaison Officers and Nurse Navigators. There is emerging evidence that they are helping to integrate care, strengthening relationships between different healthcare settings and improve care quality.

Interstitium Practitioners are comfortable inhabiting the dynamic and complex interstitial spaces between specialties, settings, and stakeholders. They have the confidence to venture into healthcare silos and possess the requisite skills, knowledge, and characteristics to influence and create valuable sociotechnical connections.